Divorce is not easy.  Divorcing with children is particularly difficult.  Here is this person that for one reason or another, you have decided to part ways with.  You would love nothing more than to turn and walk away and, for all intents and purposes…never see again.  But……you can’t.  There are children, your flesh and blood and his/her flesh and blood, left in the middle.  Now you find yourself in the situation of sharing time, sharing responsibilities, etc. with someone who you’d really rather not have to share anything with (that’s how it felt for me and I’m pretty sure, the same for my ex).

noun 1. a divorced or separated parent who shares equally with the other parent in the custody and care of a child.

verb (used with object) 2. to share equally with another parent in the care of (a child).

verb (used without object) 3. to act as a co-parent.

The goal and purpose of co-parenting is to share the load equally.  This is done (hopefully) for the benefit of the children, so that despite the break up of their home, they still feel loved and taken care of by both mom and dad.  It’s hard especially if there are hurt feelings, bitterness and resentment between mom and dad.  Those feelings can wane over a period of time, but unfortunately, that is not always the case.

When this whole process began for me over 4 years ago, it was, to put it bluntly, UGLY, very ugly.  Over time, things have improved for my son’s father and I but there is still tension and resentment there.  I will be honest and tell you that it is not all one-sided.  We both share some of it, as much as I’d rather not admit it.  There are times when I struggle with being non-confrontational, democratic and kind.  Perhaps I may be justified in feeling some kind of way towards him, BUT, when it comes to our child…..I must put that aside. 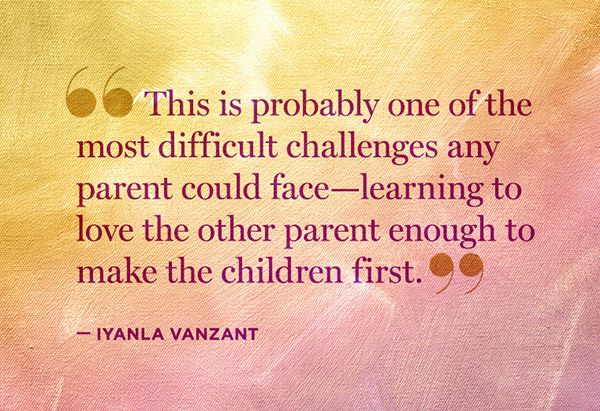 The one skill that seems to help me in these difficult situations with my son’s father is being slow to react/respond.  If I wait a few moments or hours before responding to a call/text/email that is confrontational or angry, I am more likely to come at the situation with a level head.  I try to allow myself time to process the situation, recognize what about it makes me angry/upset and then to focus on the real issue at hand and to respond to that instead.  At the beginning of my co-parenting experience, I was very reactionary and not very proactive.  As soon as his father would say something, insinuate something, I was ready with a retort.  Where did that get me???  NOWHERE!! 🙂 lol Typically, it would turn things into a full-blown argument which then led to our son in the middle of awkward and uncomfortable exchanges.  So..not…worth…it!

Another lesson I have learned over the years is to pick my battles.  There are some things that just aren’t worth spending your time and energy on.  Is it something that will have a serious emotional, physical, medical impact on the child?  Or is it something that just rubs you the wrong way?  There comes a time when you have to realize that there are certain things you can’t/won’t have control over at the other parent’s house.  I will be the first to tell you, giving up control and stepping back, has always been difficult for me.  It is a personal struggle in all aspects of my life.  Going through this process of divorce and co-parenting has really helped me to learn ways of letting go of control.  Do I do it all the time??  NO!  But I am doing better at it than I was.  😛

This life is not an easy one, some days will be harder than others, but never forget about all your blessings including that little one that calls you Mama. ❤  🙂

One thought on “Co-Parenting After Divorce”